Illinois Law Update: Driving with a phone in hand, even at stop lights, will result in traffic ticket

By Judson GrahamJuly 1, 2019News
No Comments

Home » News » Illinois Law Update: Driving with a phone in hand, even at stop lights, will result in traffic ticket 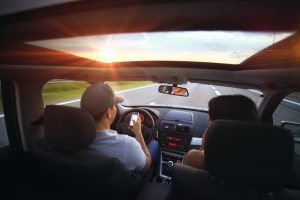 It is illegal to use a cell phone while driving in Illinois, even if a driver is stopped at a red light or stop sign.  Beginning July 1, 2019, police officers in Illinois will be ticketing drivers who use a mobile device while in a vehicle that is on the road.

Under Illinois’ Distracted Driving laws, it has always been illegal for drivers to use handheld electronic devices while operating a car.  Until now, the law used to allow police officers to issue a warning to first time offenders.  Now, cops will be issuing moving violation tickets to these drivers.

Hands-free devices, such as those that operate through Bluetooth, or through a vehicle’s speaker system are allowed for drivers 19 and older.  However, if a driver is seen interacting with (or likely even holding) a cell phone while on the roadway, this could result in a moving violation ticket.    According to the Illinois Cyber Drive website, the only time Illinois drivers can use a cell phone that is not hands free is report emergency situations, while parked on the shoulder, or while on the road if traffic is obstructed and the vehicle is in neutral or park.

Nationwide there were over 2,900 distracted driving related crashes in 2017, according to a National Highway Traffic Safety Administration study.  In Illinois, 67 fatal crashes were attributed to a driver being distracted in 2017.  The data also suggests that distracted driving fatalities are increasing in Illinois, at an alarming rate.